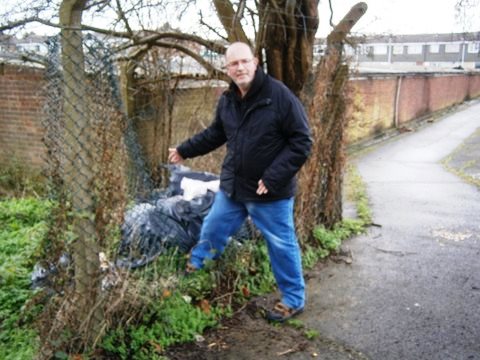 Residents from Inverness Close and Berwick Drive came to their local councillors surgery in late January to complain about the dangerous state of the storm drain, behind their homes, the defective fencing and rubbish that has accumulated locally.

The drain is prone to flooding and in recent wet weather is in danger of flooding as the flow away of the drain suggests that there may be blockages in the underground areas of the drain.

The fencing that stops children getting into a dangerous storm drain has been broken for many months. Despite requests from residents and local councillors Milton Keynes Council has failed to make safe the open storm drain fence and tackle the dumped rubbish that has accumulated by the broken fencing.

Cllr Nigel Long said, “I had a look at the drain. There are two large gaps in the security fencing that children could easily get through. There is a large amount of rubbish dumped by the drain and the neighbouring alleyway from Inverness Close to Berwick Drive, appears not to have been cleaned for months.”

The problems of the storm drain have been raised over many years by local councillors and the parish council. Cllr Legg had previously raised the dangers of the broken security fencing and of rats getting into nearby houses.

Cllr Long concluded, “I have written to the Council asking for the fencing to immediately be made secure and for the rubbish around the drain to be cleaned up. I also want the cleansing of that whole area to be improved.”