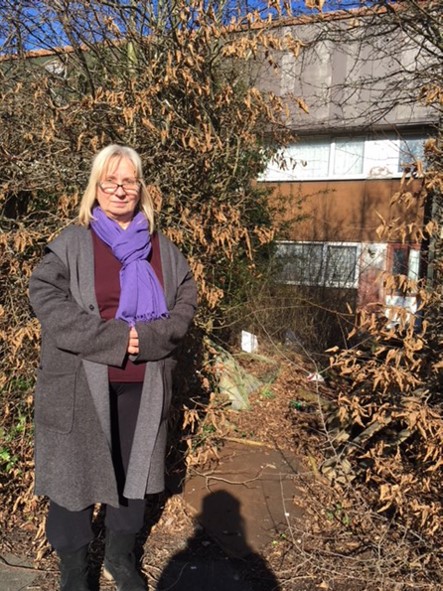 143 Kingsfold is a terraced house in Bradville.  No-one lives in it, and its owner, who is believed to live abroad, has allowed it to become derelict.

Bradville Community campaigner  Hannah Minns is calling for action to bring the house back into use.

“We have a housing crisis here in MK, with over 650 homeless families desperately seeking affordable places to live.  It is scandalous that this house is being left empty”

“It’s also scandalous because its condition is making it a danger to its neighbours” she continued.  “I’m calling for Milton Keynes Council to use its powers to force the owner to repair it and bring it back into use, or alternatively to take that action itself. It should use its compulsory purchase powers to bring the house back into use. “

Hannah believes that there are empty private properties all across Milton Keynes. She believes properties like the one on Bradville could provide much needed housing to tackle homelessness. She has raised the matter with MK Council Cabinet member for Housing Cllr Nigel Long.

Hanah Minns said, added further “I have asked the Cabinet member for housing, Nigel Long, to look at what action the Council could take to bring the property on Bradville back into use.”

Cllr Nigel Long said, “Hannah Minns is right to raise the problem of privately owned houses sitting empty. I agree that action is needed so I have asked the Councils Private sector team to look at this property and see what can be done, up to and including Compulsory Purchase.”