When is a pothole not a pothole? 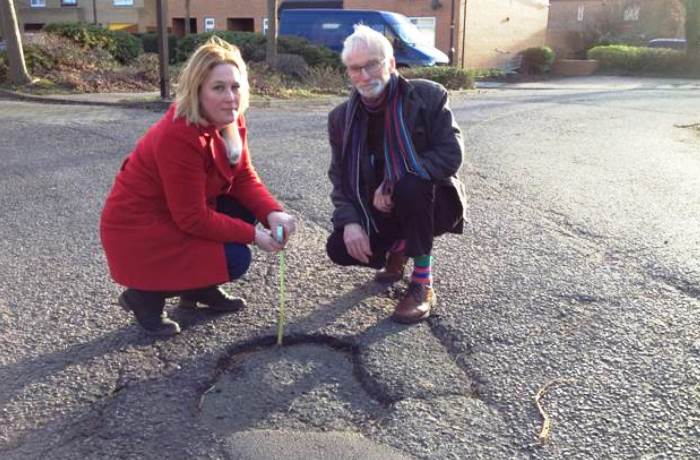 Parish councillor Martin Petchey & Labour Parliamentary Candidate Emily Darlington were left bemused after MK Council refused to fix a pothole as it was 1cm too shallow.

Cllr Martin Petchey reported the Fishermead pothole, to Milton Keynes Council after local residents raised the issue with him. However after inspecting the pothole MK Council told him that it was not deep enough to repair. Already 4cm deep, he was told that the Council was prioritising resources and only repaired pot holes when they reached 5cm deep and above.

MK Council told Cllr Petchey that they would continue to monitor the hole until it became big enough to fix.

The issue came as Parliamentary candidate Emily Darlington is finding the number of people reporting potholes to her has risen as a result of the wet weather.

Cllr Martin Petchey said:  “I think it is odd that MK Council have set the level at which they repair road defects at such a high level. We are being told there are fewer potholes that need repairing, but it is that because they have simply changed what a pothole is?”

“The pothole on the Polruan Place roundabout is quite dangerous and can’t really be avoided. It won’t be long before something is damaged or worse. I can’t believe that MK Council will spend money monitoring a whole while it gets bigger instead of fixing it for residents.”

Emily Darlington added: “My email traffic is full of people saying the roads are in a terrible state while the Tory-led Council claim there are fewer potholes. People simply don’t believe it.”

“I wonder how many potholes there are out there that are being “monitored”. It seems like a huge waste of resources to me and 5cm seems like a very high threshold for repairs to start. Surly the bigger the hole the more money it takes to fix? I think it would be far more efficient to fix more smaller holes before they get worse and need more work? It is impossible to fix every pothole, but is it any wonder the roads are in such a poor state when the policy is to only fix them when they become like craters?”