Learning at the heart of Milton Keynes’ future 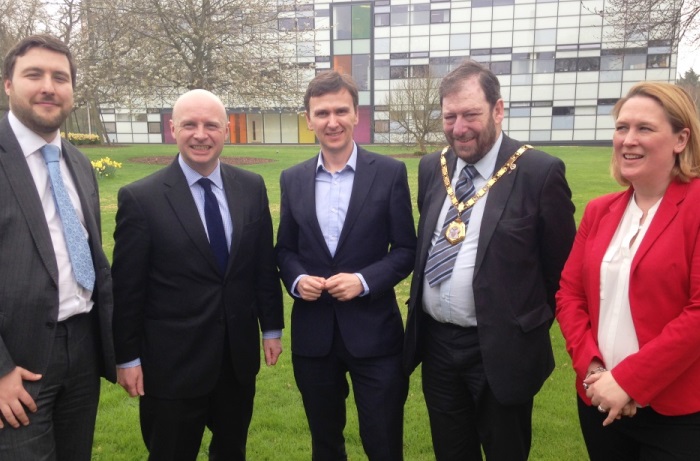 Labour’s Shadow Minister for Higher Education Liam Byrne MP visited the Open University on Thursday to discuss how bringing universities and businesses more closely together will help make Milton Keynes a leader in the knowledge economy.

Milton Keynes is already at the heart of cutting edge research and technologies at both the Open University and the UCMK campuses. It is the location for key national research initiatives such as the Transport Catapult and Smart Cities and has many world class research units.

“The universities in Milton Keynes are so important to your city’s future and our nation’s success. They are the power-houses of the knowledge economy. They need to be bigger, stronger, more central to our economy in the years to come. By working with local businesses, they are preparing our young people and preparing our country for a very different world taking shape around us.” said Liam Byrne MP.

“The OU has been at the cutting edge of helping anyone, from any background, have a chance for a university degree. I want every child in Milton Keynes to have the opportunity to gain a post-18 qualification and the OU is an important part of making that happen.” said Andrew Pakes, Labour Parliamentary Candidate for Milton Keynes South.

“We have world renowned research strengths and businesses in the fast growing digital and technology sector. We are currently one of the UK’s the top 10 of digital hotspots but I think we can be number one. By working closely together, we can create the jobs, companies and innovations of the future right here in Milton Keynes.” said Emily Darlington, Labour Parliamentary Candidate for Milton Keynes North.

“The council can play an important role in supporting businesses and the universities to develop the future especially in transport. These partnerships could transform how people travel into and around Milton Keynes, putting us at the forefront once again.” said Cllr Pete Marland, Labour Council Leader.