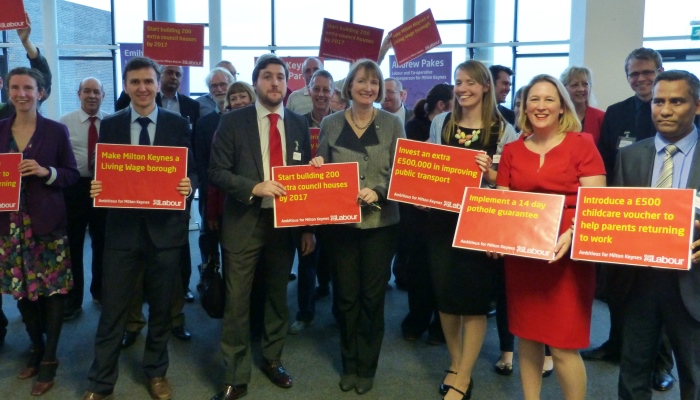 Labour’s deputy leader Harriet Harman MP was in Milton Keynes on Wednesday to launch Labour’s campaign for the forthcoming council elections on 22 May.

Over 150 people joined Harriet Harman at reception and campaign launch at MK Academy in Leadenhall to hear more about Labour’s local plans for Milton Keynes.

The elections on 22 May this year will see all 57 councillors up for election on the newly expanded Milton Keynes council. Labour will be contesting all wards and hoping to make gains against the incumbent minority-Conservative administration.

Labour used the opportunity for Harriet Harman’s visit to unveil their election pledges, with affordable housing and help for families with the cost living being the top priorities for the party in the city.

Labour Group Leader, Cllr Pete Marland, described as manifesto as ‘ambitious for the future of Milton Keynes’ and focused on the issues that people had raised with the party on the doorstep.

Labour’s key pledges for the council are to:

Harriet Harman, Deputy Leader of the Labour Party said: “It was great to see so many people at the launch of Labour’s Milton Keynes Election campaign.

“This is a very important election for Milton Keynes -the Tory-Lib Dem Government’s economic decisions have continued to stifle economic growth and undermine vital public services in Milton Keynes. People in Milton Keynes are paying the price for these failed Tory-Lib Dem policies and are an estimated £2061 worse off now than since the General Election in 2010. Thousands of families are being hit hard by this out-of-touch government -; and young people are still struggling to find work.

“But Cllr Pete Marland and his team have set out how they can make a difference and be ambitious for Milton Keynes.”

Cllr Pete Marland, said voting for Labour will mean positive policies and a bright future,”Milton Keynes needs ambitious leadership that is up to the challenges of growth. Labour want to ensure Milton Keynes Council delivers the services we all need, putting people at the centre of our growth.

“We want to ensure that people who’ve grown up in the city aren’t priced out of renting or buying here, we will make affordable housing a priority and set a target of building 200 new council houses. We will also make MK a Living Wage borough, paying fair wages to council staff and contractors, and helping to attract the best employers to the city. We are ambitious for Milton Keynes and a vote for Labour says you feel the same.”

You can get involved and have your say about Labour’s plans for Milton Keynes by clicking here.