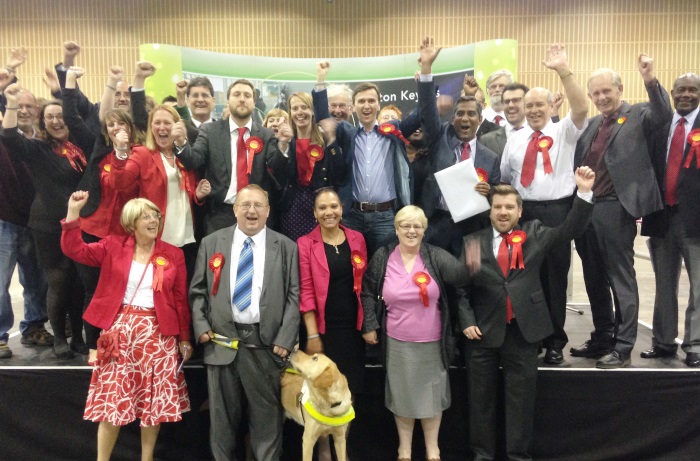 Labour has become the biggest party on a new look Milton Keynes Council after making impressive gains at the local election.

The Conservatives had been the biggest party but following the election power has shifted Labour’s way.

Boundary changes meant that every council seat was up for grabs, the number of council seats also increased.

Before the elections there were 19 Conservative, 16 Labour, 15 Lib Dem and one UKIP councillor. There are now 25 Labour councillors, 18 Conservatives and 13 Liberal Democrats and 1 UKIP.

The results came in late on Friday night but Labour councillors say it was worth the wait.

Pete Marland, leader of the Labour group, said; “I am honoured to lead the wonderful Future city of Milton Keynes.

“The Labour Party believes MK has a great future and that’s why we’re ambitious for Milton Keynes, we have positive ideas to help businesses and families get on whilst the economy begins to recover.”

You can read more about our manifesto – Ambitious for Milton Keynes – by clicking here.

During the campaign a number of senior party figures visited to support the candidates including Ed Miliband, Harriet Harman and Yvette Cooper.

The result is good news for Labour’s General Election candidates in the city Andrew Pakes and Emily Darlington.

Andrew Pakes, Labour’s Parliamentary Candidate for Milton Keynes South said: “This was MK Labour’s best council result since 1996 and shows that there is an appetite for change in Milton Keynes.

“Over the last year we have knocked on thousands of doors and listened to people’s concerns about the cost of living, better childcare and more affordable homes, as well as local issues like the Tories failure to get a grip on potholes.

“We need to be ambitious for the future of Milton Keynes, a message that Labour will continue to press home as we approach the General Election next year.”

You can read more about Labour’s gains in Milton Keynes by clicking here.

The detailed results for each ward are online here.