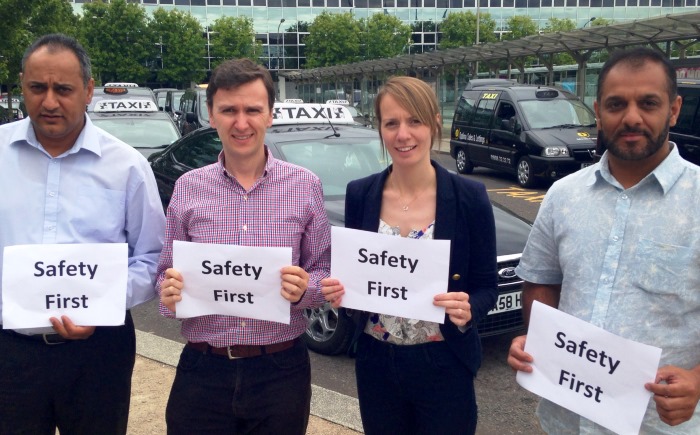 Milton Keynes Council Leader, Pete Marland, and Andrew Pakes, Labour’s Parliamentary Candidate for Milton Keynes South, have written to Baroness Thornton in the House of Lords to express their concerns about the government’s plans to weaken public protection over taxi laws.

On Tuesday 21 October the House of Lords debated the government’s plans to weaken the rules governing taxi and mini-cabs. In advance of the debate, Cllr Pete Marland and Andrew Pakes wrote to Labour’s Baroness Thornton with their concerns about the plans – which were referred to during the debate.

RE: Public safety and the government’s reforms to taxi and mini-cab laws

We are writing to you about our serious concerns with the government’s plans to weaken the rules for taxis and mini-cabs contained in the Deregulation Bill.

It is clear that the Government’s planned reform of taxi and private hire vehicle regulations threaten to put passengers at risk.  Our experience in Milton Keynes, whereby serious errors by a sub-committee of councillors on licensing led to the inexcusable decision to allow a convicted sex offender to operate a private hire vehicle, illustrates the importance of getting the balance of regulation right.

The inexplicable error to grant a license to a sex offender in Milton Keynes happened under existing regulations. Milton Keynes Council acted swiftly on becoming aware of this decision suspending the license of the driver in question and reviewing the borough’s taxi regulations to strengthen public protection.

The case proves that we need better regulation to protect the public, and law-abiding taxi drivers, rather than a rushed and ill-judged approach to weaken the rules on taxi and private hire vehicles.

Even with the government’s last minute u-turn on allowing people to drive “off duty” mini-cabs, we are greatly concerned by the public safety perceptions of the remaining taxi laws in the Deregulation Bill. It is wrong that drivers will not have their licenced checked annually, and minicab operators will be able to transfer a booking to a firm in another area. This will mean people in Milton Keynes who get into a minicab won’t be sure whether it has come from the company they booked with, can’t know if vehicle and driver have been safety checked in the local area, and won’t be certain that the person driving it is licensed to do.

The current taxi licensing regime needs reviewing to improve public safety and to ensure effective scrutiny and guidance is made available to public authorities.  Yet, the clauses tabled in the government’s name as part of the Deregulation Bill leave public safeguards in a weaker position.

We share concerns expressed by a wide range of groups, including the Local Government Association and Suzy Lamplugh Trust, that these plans should be withdrawn at the earliest opportunity.

The recent case in Milton Keynes has exposed significant concerns about taxi and private hire regulations, yet none of this evidence points to weakening what existing powers councils have further.

We wish you well in highlighting these issues during the Report Stage of the Deregulation Bill in the House of Lords this week.

You can read the Local Government Associations concerns about the government’s plans by clicking here.

Andrew first raised concerns about taxi and mini-cab plans in June – you can read more here.