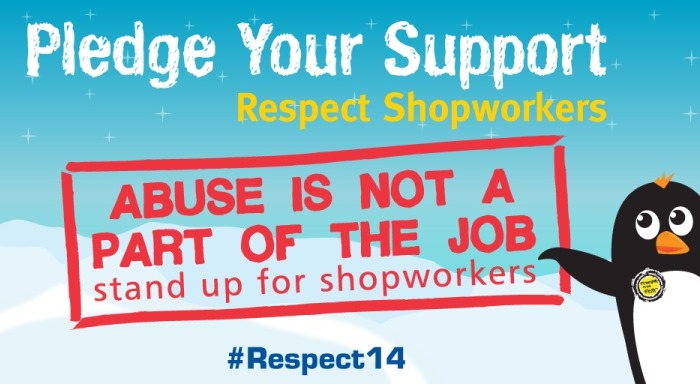 Senior Labour figures in Milton Keynes have joined with members of the retail union Usdaw to campaign for respect for shopworkers as part of the Freedom From Fear Campaign, which seeks to prevent violence, threats and abuse directed at retail staff.

Cllr Hannah O’Neill, Deputy Leader of Milton Keynes Council, joined staff at Tesco’s in Bletchley on Wednesday to pledge her support for ‘Keep your cool at Christmas’ campaign. The campaign has also received the backing of Andrew Pakes, Labour’s Parliamentary Candidate for Milton Keynes South, who has been working with Usdaw members across the city on the issue.

Respect for Shopworkers Week takes place at the beginning of November each year and is the central event of the Freedom From Fear Campaign.  This year it is taking place between 10 and 14 November and will involve staff at major retailers across the city.

The event in Bletchley was organised by Steve Mullen and Jean Weeks who are Usdaw staff representatives at the Tesco store. The theme this year is ‘Keep Your Cool at Christmas’ and seeks to highlight the rising tension levels in stores during the Christmas shopping period whilst reinforcing the message that abuse is not part of the job.

Cllr Hannah O’Neill, deputy leader of Milton Keynes Council , said: “Too often retail employees are confronted with violence, threats and abuse and it is really important we stand together and ask people to respect shopworkers.  The festive season can be a stressful time, but that is no excuse for taking out frustrations on shop staff.

“I will continue to campaign with Usdaw and retailers to ensure that shop workers can work safely and with proper protection against harassment. We must give a clear message that verbally or physically assaulting workers who are serving the public is totally unacceptable.”

Andrew Pakes, Labour’s Parliamentary Candidate for Milton Keynes South, said: “My first job was working in the shop at Newport Pagnell service station and I remember how stressful it could become at busy times.  This is a really important campaign and it is good to see the council, Tesco and Usdaw working together to improve things for staff and customers. We need zero tolerance to abuse of shop workers.”

Jean Weeks, Usdaw member at Tesco Bletchley commented:   “We are grateful to Hannah for supporting our campaign to keep our members safe at work. The Freedom From Fear Campaign is one of Usdaw’s main campaigns and is incredibly important to the lives of our members.

“Often, in the course of their duties, shopworkers are expected to enforce the law, whether that is preventing under-age purchases of products like knives, tobacco or alcohol, or detaining shoplifters until the police arrive, they can be put in real danger.  Thanks to Labour, Milton Keynes Council and Tesco for supporting this campaign.”