The figures were detailed in data published on the 6 March by the Local Government Association (LGA*) highlighting that Councils are spending £2 million a day on temporary accommodation for homeless families  See more information here:

The LGA highlighted that across the country “The number of affordable homes added to the nation’s stock in 2015/16 fell by 52% and was the lowest number in 24 years. Just 6,550 social rented homes were built in the same year.”

Labour believe that the Government needs to do 3 things that would immediately address the growing housing shortage:

“It is outrageous that we are spending £21,000 a day to pay landlords to provide temporary accommodation for homeless households, most of whom are in work. This reflects the lack of affordable housing in Milton Keynes. It is also a direct consequence of a private rented sector charging high rents, that Housing Benefit does not cover in full.”

Cllr Long  concluded, “We support the cross party LGA call for the removal of the cap, so we can be free to invest, we support the right to keep 100% of capital receipts to invest in new homes. We support removing the freeze on the LHA.

It is absolutely ridiculous that we are forced to spend £7.5 million on temporary accommodation rather than building new affordable homes. It is the failed economics of Government’s “austerity” and last weeks budget gave us absolutely nothing to address the desperate need for affordable housing. ”

UPDATE: Cllr Long has written to the Government Minister after comments from one of the MPs. 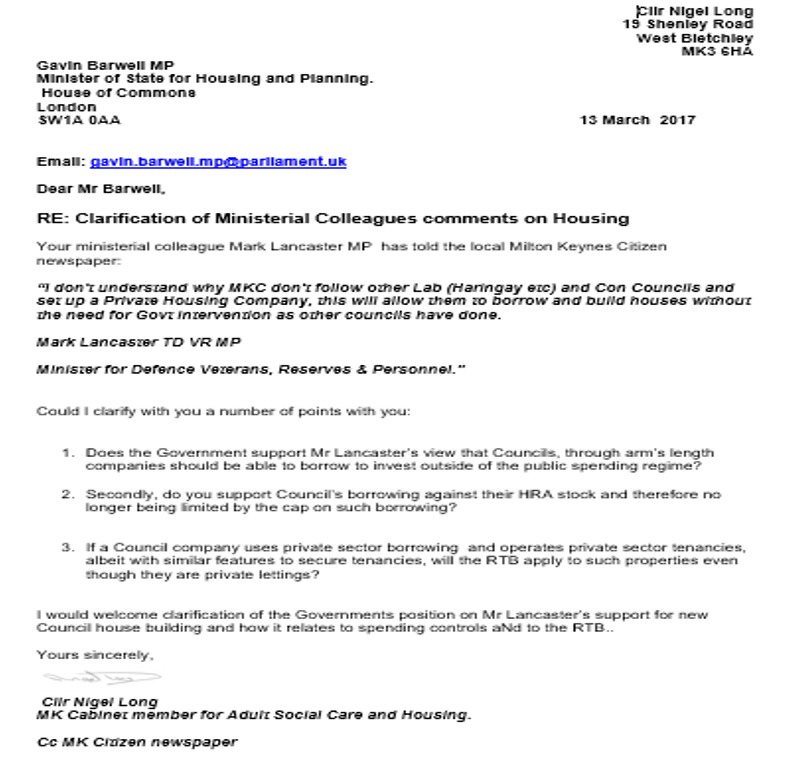 *The Local Government Association are a politically-led, cross-party organisation that works on behalf of councils to ensure local government has a strong, credible voice with national government. We aim to influence and set the political agenda on the issues that matter to councils so they are able to deliver local solutions to national problems.