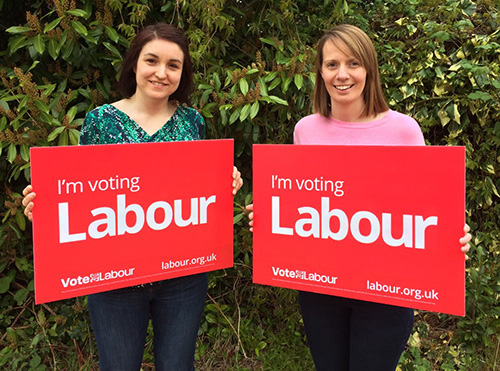 Locally born and bred candidates have been chosen to contest the two Milton Keynes constituencies for the Labour Party in the forthcoming General Election on June 8th.

35 year old Hannah lives at Peartree Bridge and has been a Labour Councillor for the Woughton & Fishermead Ward since 2008 and is currently Deputy Leader of Milton Keynes Council. She has a daughter who is one year old this month.

32 Year Old Charlynne was one of the very first babies to be born at the then just opened Milton Keynes Hospital. A former Councillor in London, Charlynne works in Further Education and is a governor at Milton Keynes College.

Both Milton Keynes Constituencies are regarded as marginal seats and Labour are hoping to be successful on June 8th. Certainly both candidates and the local Party will be working hard and will be meeting as many voters as possible over the next few weeks.

If elected Hannah and Charlynne will be the first Members of Parliament to have been born and brought up in Milton Keynes. Hannah went to St Pauls school, and Charlynne was a student at Ousedale school.

Charlynne said of her selection:

“I am delighted to have been asked to be the candidate for the area where I was born and brought up. As an Open University graduate, and governor at Milton Keynes College, I’ll stand up for the education of our children and adults against Conservative plans to slash funding.”

Hannah reacted to her selection by saying:

“I have really enjoyed my 9 years on Milton Keynes Council, but this gives me the opportunity to represent my City at a national level. The present Conservative Government have let Milton Keynes down at every step, most recently over their refusal to allow the Council to build many more Council houses.”

“Milton Keynes Labour Party is by far the largest political party in Milton Keynes with over 1500 members and we had a number of very competent local party members to choose from to be our candidates. Two weeks after this general election was called we have candidates who I know will serve the people of Milton Keynes effectively and with passion as our members of parliament.”

“I am so pleased that two local and hard working women will be Labour’s candidates at this election. I know that both of them will want to work closely with Milton Keynes Council and the large number of Parish, Town & Community Councils in the area. Together the Council with Hannah and Charlynne will make an extremely strong team backing Milton Keynes.”