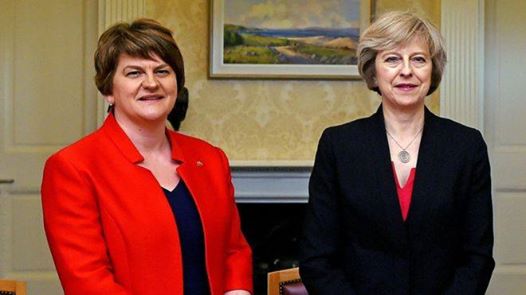 The Labour Deputy Leader of MK Council Cllr Hannah O’Neill has called on Milton Keynes’ two Conservative MPs to reject any deal Theresa May could make with the Democratic Unionist Party to remain as Prime Minister.

Cllr O’Neill slashed the majority of Conservative Iain Stewart in MK South to just 1,500 while MK North stayed Tory by just 1,800 votes, making the two seats now amongst the most marginal in the country, as Theresa May’s gamble to hold an early General Election backfired.

It has now emerged that in order to stay Prime Minister, Theresa May and the Conservatives are negotiating a deal with 10 Northern Irish MPs from the Democratic Unionist Party (DUP). The party is controversial as they have previously denied climate change exists, opposed LGBT rights, supported creationism being taught in schools as science and opposed freedom of choice for women on abortion.

Cllr O’Neill is calling on Mark Lancaster and Iain Stewart to follow many other Tory MPs and speak out against any such deal and oppose any Tory deal with the DUP or face a backlash from the people of Milton Keynes.

“Having had their majorities slashed after a disastrous early General Election for the Conservatives, will our local MPs now speak out against any deal with a party whose views will no doubt disturb the vast majority of people in Milton Keynes, including those who voted Conservative?“

She continued “The DUP have views that will horrify most people. They are anti-LGBT, anti-climate change, anti-science and anti-women. They have fringe views that deserve to be marginalised in a modern society, not brought into the heart of government.“

She concluded “Milton Keynes is a fantastic, tolerant and open City. Our MPs should say to Theresa May they clearly oppose working with the DUP in any form, or they risk showing the people of MK they care more about power than the values of our City.“