Housing for the Many 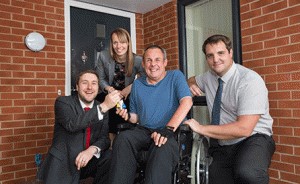 “A decent home is at the heart of our lives. It is where we live, laugh and love. It is where we withdraw when we are ill, and where our children sleep at night. It is the bedrock of our dreams and aspirations.” – (Labour Party Housing Green Paper (April 2018)

The proposals address the major failure in the housing market in Milton Keynes. Locally we face the following problems:

Cllr Peter Marland, Leader of MK Council said: “I welcome the Labour Party’s proposals to address the housing crisis facing the Country and in particular Milton Keynes. I have asked the Council to look at the proposals and to support the measures to increase the supply of affordable housing, address security of tenure and to suspend the Right to Buy that is causing long term problems across Milton Keynes, as private landlords cash in, buying up former Council houses and then letting them at very high rents. “

The problem of affordable housing needs to be addressed. The Conservatives in 2010 defined ‘affordable housing’ as 80% of market rents. That means they think paying £800-£900 a month is an affordable rent in Milton Keynes. They don’t live in the real World of low wages and tight family budgets.

Cllr Nigel Long, Cabinet member for Adult Social Care and Housing added, “In Milton Keynes we face an affordability crisis created by Conservative Governments since 2010. In Milton Keynes  we are achieving only 41% of the affordable housing target for new homes. But within that Government definition, many of the 41% are not genuinely affordable. Labour’s Green Paper proposals will allow the introduction of new affordable rents and a scheme, called FirstBuy homes to increase access to low cost home ownership. We have to abandon the Conservative approach to affordability, offer choice and make homes affordable again.”

Cllr Marland concluded: “Housing supply in Milton Keynes is made difficult by developers land banking, and by Government definitions of affordability. Labour led Milton Keynes Council will build 500 new Council houses by 2022 and we will keep long term tenancies. We will also support secure tenancies for private and Council tenancies. We welcome the Labour Party’s proposals to increase housing investment in new affordable homes, to suspend the Right to Buy and the proposed introduction of a new Decent Homes 2 programme, that would help our regeneration plans.”

Note: Pictured above are Council Leader Pete Marland and Deputy Leader Hannah O’Neill at the opening of the first new Council housing in Milton Keynes in 2015. The first of 200 new properties.